Third-World IT (on a shoe string)

Our focus today was the visit to a half-way house run by Oasis. It is home to six girls that have been freed from prostitution, with the aim of helping them return to a normal, self-sufficient life style.

Yet again, we were moved by both the scale of the suffering and the dedication and effectiveness of the Oasis staff.

This visit doubled up with Dave running a training session on Communication Skills and I one on IT (small topic really).

My session was prefixed by a morning working with Oasis's 21 year old IT administrator, to help figure out areas for improvement. He is the sole support to 30-40 users in Mumbai, spread across at least four different offices (in can take two hours to drive across Mumbai at rush hour). Most of their equipment is over ten years old (Windows XP on a P2 with 500MB RAM). We came up with a proposal for a (free) Google based architecture to help address their needs. Just wish I was here for four more weeks in order to help implement it.

Today was a turning point for me. For the last few years I've been wanting to use my skills to help people in the third-world, and I was not only finally doing just that, but I glimpsed how it could be applied to other NGO's too. This was combined by a deep appreciation of the difference that Oasis is making to the lives of Mumbai's poor. I don't know what will happen next, but I'll return to the UK with a passion to do much more to help Oasis India.

We returned to the Aruna Project Office today to help run a kids session. As the prostitutes work all night, their children are left unsupervised during the day, which can leave them vulnerable to abuse. Twenty children were there, aged approximately 5-15.

Tim did a fantastic job of entertaining them on the guitar. Despite his warnings, we then cracked open the modelling balloons. Even with two balloon modellers at work (plus Graham blowing hard and Lyndsay fumbling knots) chaos soon broke out.

The Oasis staff ended the session by providing lunch to the children, which calmed things down considerably. It was a privilege to be a tiny part of the work they do. 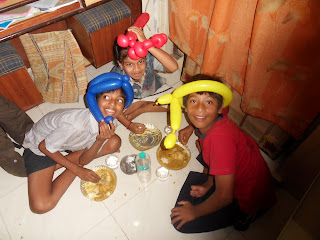 I'm providing IT training tomorrow, after Tim leads an acting session at an Oasis Boys Home. Prayers would be appreciated!
Posted by Unknown at 12:13 2 comments:

A battle of good and evil

The initial post title was Four white men spotted in Mumbai's red light district. Whilst this seems funny at first, the reality of what happens here is far from it.

Today was the hardest day of the trip so far. It was too physically dangerous to take photos, and the spiritual battle being waged was also tangibly fierce. Yet, despite this being the largest red-light area in the world, women, men and children are being freed from it. The Aruna Project that we visited works with approximately 1500 women and 30 children in this area, out of just one, small drop-in centre. It's fourteen workers do incredible work.

Please read more and provide your support via Aruna's Oasis page.
Posted by Unknown at 18:02 1 comment:

Oasis in the slums

Today is the Muslim festival of Bakri-Id. In my home of rural South England, this would go largely unnoticed, but in Mumbai, with its high percentage of Muslims, it meant there were approximately 15,000 Muslims assembled for prayer at the mosque near our YMCA.

Our morning was spent at the main Oasis office, located in the middle of a Muslim part of Mumbai. Four goats had just been slaughtered next door, as part of Bakri-Id, and were strung up to be skinned (taking a photo was not appropriate, so I'll let you imagine the scene). 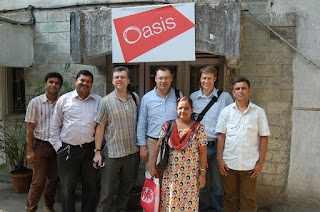 The Oasis team gave us a fantastic, family welcome (my reading of Mark 3:31-35 that morning was particularly poignant). Jeanie and Aabuu briefed us on Oasis's work, which was both distressing and encouraging at the same time. The numbers are devastating: 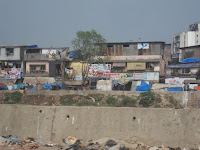 Whilst this figures make the task seem near impossible, Oasis is unswervingly focused on transformation, one life at a time. We visited two slum projects today, which clearly showed the difference they were making: 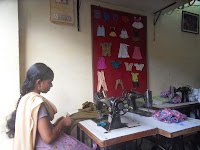 During our visit to the slum, we also went to see the family of Mina, who Dave knew from a previous visit. She was a single mother, with two children, one of which has Cerebral Palsy. They live in a 4ft x 10ft room, which is not bad by Mumbai's standards.

I was stunned by my first experience of the slums. The smells and claustrophobic living was overpowering, but as was the friendliness of the people we met, and the seeds of hope that Oasis has planted there.


The day was capped off with an after dusk walk through a back-street, Muslim community, to have a shave and head massage at a local barbers. It was, again, a unique experience. The sights, smells and sounds were deafening: people lived as much on the street as in the densely packed houses. Tuk-tuks, cars and bikes wove through the people. Choosing where to walk was a balance between being nearly run over or stepping  through someone's kitchen. It was surreal.

Today has left me speechless, but thankful. God is at work, through Oasis, in bringing restoration to these communities. 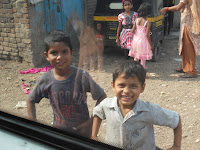 We made it to Mumbai in one piece, via an overnight flight through Dubai. An Oasis worker kindly drove us to our base for the week, the YMCA. His driving was excellent, especially when compared to the taxi rides we had later in the day. Driving in Mumbai requires lots of honking, no lights (especially after dark) and optional observance of traffic lights and any other suggestion to stop. As a passenger, its best to keep one's eyes shut.

I dislike cities because I feel threatened by them, and I was unsure how I'd cope with Mumbai's crowds. There were fewer beggars than I expected, though seeing the one child tapping on our taxi window was saddening enough. He was about eight-year's old and was showing us his right leg, which was just a stump below the knee.

A local church, with links to Oasis, had invited to us to speak. We were very humbled by the warm, loving welcome we received. I was particularly struck by one of the congregation, Jabbal, who was converted to Christianity from Islam when he was 25. He now pastors his own church further north, with a strong emphasis on meeting and discipling Muslims and Hindus. Dave talked about forgiveness, which Tim illustrated using some touch paper. Graham and I then joined them in praying for those wanting help with forgiving others.